Downstairs at The Butterfly Club, a lone voice sails out over the seats. In her Fringe debut show Estrella Wing, Showgirl, Margot Tanjutco is combining jazz, pop, and soul with narration lending itself to both historical stories from the 1940’s and hits of magical realism not unlike that of film classic Amélie. The 22 year old is rehearsing on her own, but it’s not long before the show’s namesake Estrella Wing and the other characters in this one woman show breathe life into the empty air.

The resulting show follows young starlet Estrella Wing and delves deeper into her world, exploring her story through the narrator’s voice and created characters that pop-up along the way.

While this is her first solo show, Tanjutco is no stranger to the world of theatre, continuing with two years of drama education and diplomas after leaving high school, including being part of The Malthouse’s Provocateurs program. “I met a bunch of really good people [in the program], one of whom [Jean Tong] is dramaturging my show now, and has a friggin’ play at MTC – she’s amazing!” Tanjutco says. “I ended up making a short play with some of them as well, and they’re all Asian-Australian performers and Asian playwrights. That was such a lucky thing – I almost didn’t send in my application for Provocateurs, ‘cause I was like, “Aww, I’ll do it next year ‘cause they do it every year. But no oh my God, Jeeesus…” she paused, “I feel like I wrote this because all my other friends were writing plays,” she laughs, imitating herself: “Ohh, better write a show!”

The creative community itself has been a great support to Tanjutco, “I guess there’s not many – I mean there are – there’s plenty theatre people of colour,” she continues.” But I guess you get to know the younger ones, the ones who are emerging or starting or in their early mid-twenties. And you all support each other’s shows and send each other your plays – or excerpts of it – and you send your thoughts and it’s quite generous, it’s really lovely. It’s just really nice, like’s it’s just, “Oh, they’re my friends”, and also they’re incredible. I feel like I’m living almost my bohemian life, like one day, like I’m starting to go there – one day it’ll be.. that. One day I’m gonna be Rent or something…. Without the dying and stuff.” 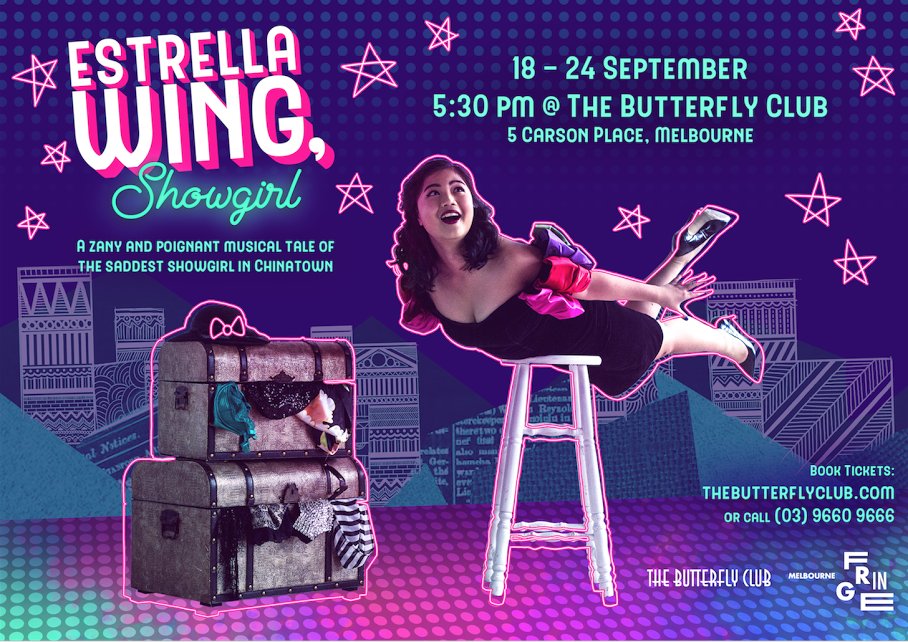 The inspiration for the show has been with Tanjutco for a long while, dating back to her time at Left Leg Dance Studio, where she needed to choreograph a solo dance piece. “I found Flower Drum Song, which is a musical from the 50’s by Rogers and Hammerstein about this scene, about the Asian-American vaudeville scene in the 1940’s. And so I was like, “oh shit that was real!” she exclaims. “I got into researching that and just kind of crying when I saw these women who looked like me in the clothes that Ginger Rogers would wear, [that] Eleanor Powell would wear – and I love those movies, I really clung onto them – even now, I love the classic films. And so, to see Asian people who looked like that, that was just really nice.

“There’s not much source material, it’s not a very well known piece of history, and I so I was able to pinpoint the two or three books and the one documentary. I ordered it and based the show off that… and so I’ve had the idea in my mind for two years.”

“Estrella is a character I made up. I want to make that clear, ‘cause it gets a bit blurry of what’s real and what’s not. She’s an American girl, cause a lot of them were. A lot of them were born in America, and they faced that kind of racism, but also that was just their lives – so they weren’t like “oh everyone is racist”, it’s like “okay, that’s my life”, and for someone in the 40’s to think that was incredible. I remember in an interview someone was like, “You just let it roll over you.” Like, ‘roll over you’, that’s amazing. It was just their lives, and the mindset that that must have demanded of them. But also they had a fucking fun time, they were having so much fun, and their parents were all in small towns and they’d leave and go to the big city of San Francisco and live their dancer actress lives.”

“Would we be friends? I think so, maybe not all the time ’cause we’re fairly similar.”

While looking back on the scene Estrella is from might draw imagery of glitz and glamour, the narrative itself reveals a more emotional story.

“I guess it explores someone being irrational, and being very driven by their emotion, and not judging that, just letting that be what it is. To find comfort in your own alone-ness, I don’t know if I want to say loneliness at this point, but definitely the show is Estrella by herself. She is by herself the whole time, and she imagines all these people in her world, saying things she wants to hear, and so it’s going “you know what, that’s actually fine,” and doing that through the story of the 1940’s makes it less: “here’s a diary of my life.” I think people are more open to seeing weird things rather than just, “I’m going to read out of my diary today”, so it was interesting absorbing all that and letting it come out in magic realism.”

As both writer and performer of the show, the script was officially locked in a week and a half before opening night. It’s now up to her to deliver and guide the audience each night through Estrella’s story, one that was undoubtedly shaped by Tanjutco’s own experiences and emotions.  “I got hit with this small-d depression,” she explains. “And that really impacted how I saw the story, and how the show is now – it’s a lot more theatrical than just cabaret, and I feel like I tried to experiment with form a little bit and not just “this is a story” or “here’s an anecdote, here’s a song, here’s anecdote, here’s a song.” There are weird bizarre monologues and weird characters that have gone in there, and really just embracing magic realism.” The show also draws inspiration from Frida Kahlo’s paintings and movies such as Amélie, with Tanjutco’s aim to create, “that collage feeling of all these things mixing together and somehow finding a place in this bigger picture.”

With opening night fast approaching, she does look fondly on the show and the achievements she’s already made. “This is the first show I’ve written in full, and definitely the longest I’ve ever committed to one idea, and that was really hard,” she says. “The show has a lot of pop, rock, and jazz – which is not what I usually sing – I’ve usually been in a musical theatre hole, and now I’m like “ooh contemporary things” and that’s been freaky, changing vocal styles and genres has been amazing.

“I’ve always wanted to embrace it but I never got a chance to and now I have to do a lot of it. It’s suddenly so many new things at the same time and it’s scary, it’s quite frightening. All in one hit – play, first show, new songs, yeah!”

Once the Melbourne Fringe Festival is finished, Tanjutco has many more ambitions she plans to chase in the creative sphere. “I’d like to write more plays, maybe not necessarily want to be in them,” she muses. “I’d like to do more plays without music, and see if I can do it, really. ‘Cause I think it’d be fun and I guess it is the next step.”