The billowing smoke from the smoking ceremony floats up to the sky, a homage to the ancestors of the Dja Dja Wurrung people. Council members, representatives, and clan members filled the tram depot courtyard, where the newest addition to the Bendigo Tourism Tram fleet stood in all it’s new glory.

It was a milestone day for Bendigo, and a milestone day for 27-year-old artist Natasha Carter. The Melbourne-based artist was selected for her love of colourful and eye-catching artwork, and her passion for marrying that with Aboriginal art. Having designed the outside panels which are broken down in detail on the inside panels, this is her biggest art piece yet. 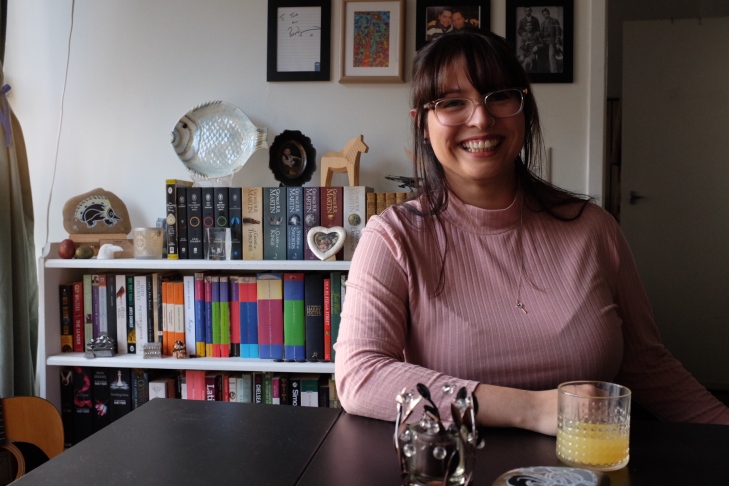 “It’s nerve wracking, exciting, with little bit of pride thrown in there too,” Carter says, “and it’s a pretty big moment, because there aren’t any of those sorts of trams anywhere else in Australia, so this is a new element to teaching Aboriginal history that I’m being a part of and that’s really exciting.” At the launch, Carter was surrounded by friends and family, with a few tears of joy shed as she was given the honour of cutting the ribbon to officially launch the tram into service.

Carter is a part of the Dja Dja Wurrung clan, whose history the tram will cover. In representing her culture through art, she has drawn inspiration from native creatures to the area, linking them together across the panels with a dark whimsy.

“It’s a mix of modern Aboriginal, I guess traditional Aboriginal elements with more modern colours in a southeastern Aboriginal art style,” she says. 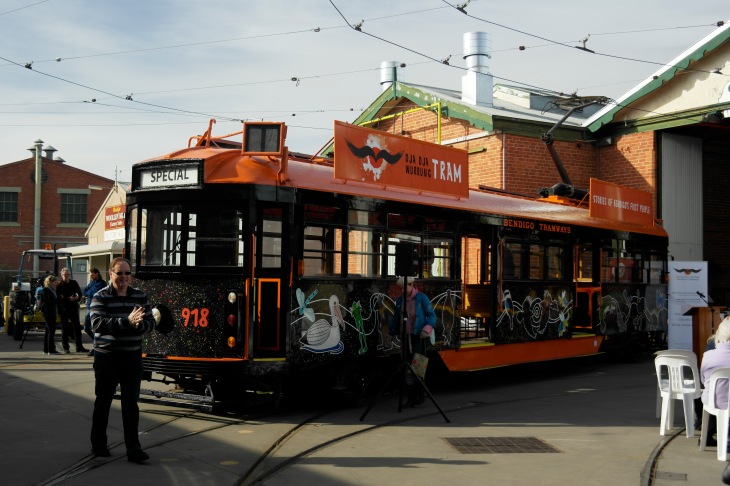 Once aboard the tram, visitors will again see Carter’s artwork, and hear her voice as she explains the stories and symbolism found in the animals displayed on the tram. The audio track for the tram’s journey was voiced by those in the Dja Dja Wurrung clan, including a few members of Carter’s family. On its maiden voyage around the track, there were beautifully heartwarming moments each time a new voice was heard, as everyone was on the tram and surrounded by loved ones, who took much glee and pride in pointing out who was speaking or singing.

Carter is no stranger to incorporating Aboriginal art into her work, having also been recently commissioned to create a piece for IKEA. She’s been asked to style a painted rock – a medium that is becoming one of her signature styles – blending both the heritage of the company with the heritage of Australia’s first people.

“The design is a mix of a scandinavian style of rose marling – obviously, IKEA being from sweden – with a black grouse, a bird that’s native from Sweden, and then a honey eater from southeast Australia done in a southeast Aboriginal style.” The piece will be displayed in store for customers and visitors to see once it is finished.

Whilst it’s undeniable that Aboriginal art is present in Australia’s modern culture, Carter believes that the representation of art that is being put forth to tourists and locals alike is only one shade of the colours and styles that Aboriginal art creates.

“You go past souvenir shops and there’s almost an oversaturation of Aboriginal art that only focuses on central and northern styles – dot painting – which, as soon as you speak of Aboriginal art, people generally go ‘oh, dot painting!’ – that’s not the style that we do down here.

“So I think it’d be great to educate about the different elements of designs. And also I think for the places that you’re selling the artwork or the souvenir items or things like that, I think it should be specifically the style done in the area, and that’ll help educate people.”

With the aim of education in mind, Carter has also been involved in the creation of a colouring book for the Dja Dja Wurrung clan. “They put out the notice that they were making the colouring book, which is for educational purposes, first and foremost to teach the kids in our clan group the language,” she says, laughing before adding: “I put in some designs, they liked them, they chose them.” Just like that, Carter became a published artist. The book is still in production, with the physical copies coming out later this year.

For new artists starting out – especially those with an Aboriginal background – Carter’s advice is to start reaching out to those around you. “Keep practicing, for starters – and really search for places you can submit your art,” she says. “There’s local small galleries – even shops will display local art as well. So you can always approach stores if you’ve noticed they display the artwork and things like that – sometimes they’re willing to take on a new artist and show their work. You won’t always get paid for those sorts of things, but to start off, I think it’s a bit of just trying to get your artwork out there.”

Looking to the future, Carter isn’t too stressed about how quickly she gets new commissions. “I guess because the tram work was my first big work, and I guess I was lacking in confidence as an artist, so I’m still kind of coming to terms with the fact that people recognise my work and actually want it. So I think I’ll take things as they come now, and maybe after I build my confidence a bit more maybe pursue something in particular.”

In the meantime, she has set up her own etsy shop to sell her work, as well as creating an Instagram page to document her artistic journey. “Social media is a massive help now, with getting artist work out,” Carter says. “And in doing that you’ll see a lot of competition, but I think it’s also good to not be disheartened by that. For most artists it’s about the heart they put into the work, so if you’re actually enjoying what you’re doing, keep doing it – there’s no reason to stop. And there’s always somebody that’ll enjoy what you’re doing, so do it for that reason.”